Skip to content
"MEC" is entirely reader-supported, and we believe in you. We may earn a small portion of affiliate commission form your successful purchase. 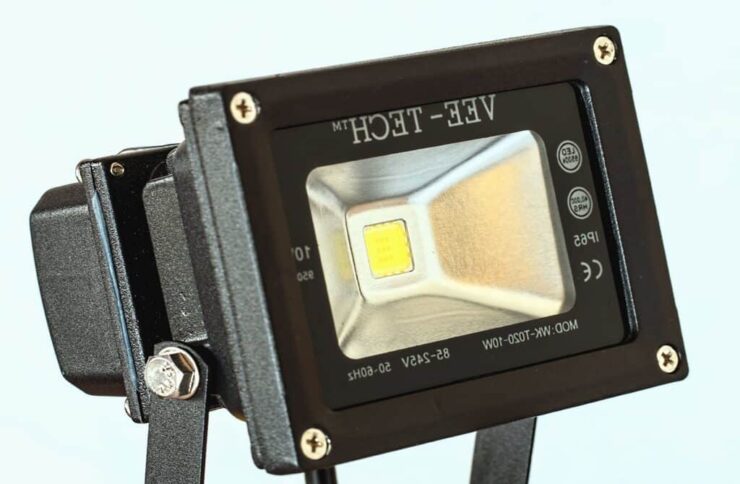 Sometimes when we include LED flood light in our lighting circuits, an annoying phenomenon occurs. Either the light bulb flickers, or it may remain dimly lit despite having the switch turned off.

These phenomena are produced many times by a residual current or because the power supply is not correct. But don’t worry, here we are going to explain all the causes and possible solutions that you can apply to correct this problem.

Why does LED Flood Light Flashing On and Off?

Modern LED flood light sources are now the standard in most offices and shops, and more and more people are relying on the new technology at home too. Compared to conventional light bulbs, LEDs consume far less electricity and last much longer, so they are very economical in the long term.

Nevertheless, LEDs are not immune to interference either. If an LED light flickers or flickers, it can quickly get on your nerves. We will show you how the fault can occur and how you can fix it quickly and easily.

If a dimmable LED flood light flashing on and off, the low wattage of the modern light sources is often behind it. The economical LEDs often do not reach the minimum load and “under-demand” the dimmer of the light. The result: the light flickers.

The solution: You need a new, LED-capable dimmer for the light or alternatively, a completely new light with a suitable LED dimmer.

When an LED flood light flashing on and off, it does so relatively regularly in most cases. One of the most common causes of such flickering is the use of an improper transformer. If you use LED lights with a low voltage (mostly 12 volts), they work with a transformer that regulates the voltage from the socket down so that the lights can work with them.

Most houses and apartments nowadays already have such transformers. However, if these are a bit older, they often have a fluctuating output voltage, which can lead to flickering lights.

Another problem with older transformers: Many LEDs work with very low wattages, so they do not achieve the required minimum load. Older transformers are usually designed for higher wattages and cannot cope with the energy-saving LEDs.

The result: the LED light flickers. The solution: replace the old transformer with a modern LED transformer or install a new transformer in the house. The best thing to do is to consult a specialist.

Our facility is not cutting the PHASE well

When our facility is not cutting the phase well, it starts flashing on and off. In this case, the problem appears due to the incorrect configuration of our installation.

There is an investment in the cables that reach the bulb, this problem is not noticeable in incandescent or halogen bulbs since the current that reaches them is insufficient to turn them on but with our new LED bulbs, it is successful.

While replacing halogen lighting with LED

Most of the time this problem appears when replacing halogen lighting with LED, simply removing some bulbs and adding others, without eliminating the transformer that we had with our halogens. The latter being the cause of the flickering of our LED bulb.

When we talk about LED lighting, instead of transformers we need drivers or controllers, which have the same function as a transformer. That is, to regulate the flow of electricity ensuring that an LED or a series of LEDs are always powered with the voltage and current adequate, regardless of the fluctuations that occur in the electrical network.

The inferior capacitor of the LED floodlight

If an LED flood light flickers regularly, an inferior capacitor in the LED light can also be the problem. Earlier lightbulbs reacted very slowly to current fluctuations so that they were hard of any consequence even with a bad capacitor. Modern LEDs, however, react more quickly and any fluctuations in current become visible as flickering.

The solution: buy high-quality LED lights. Pay attention to test symbols such as EMC, ENEC, and GS. If in doubt, ask an employee in the electronics store.

In some cases, an LED floodlight can flicker even though the light switch is switched off. The reason for this can usually be found in the electrical installation. An incorrectly connected light switch or a switch with an orientation light can be responsible for the flickering.

If an LED light flickers irregularly, i.e. only sometimes and at different intervals, troubleshooting is more difficult. It is conceivable that the power supply unit on your LED light is broken, e.g. there is a loose contact or another defect. Check this by inserting a different LED light source into the light.

The solution: Check whether the problem can be traced back to the light or the illuminant. In the first case, replace or repair the power supply, in the latter case you can simply replace the light source.

A certain minimum load is required here so that the motion detector switches without leakage currents. Motion detectors that are simply looped into the phase to the lamp are also problematic.

Some LED lights only flicker when switched on. In this case, the power supply is often to blame. The power supply unit often needs a certain operating temperature in order to work constantly.

Until this is reached, the light of the LED light can flicker. However, if these disturbances have only recently appeared when switching on, it could also be due to the capacitor.

The solution in both cases: Buy a higher quality LED light with a good power supply unit and capacitor.

How to fix LED Flood Light Flashing On and Off

There are possible solutions to the flashing of the led flood lights, we will go one by one until we solve the problem: In the event that the housing mechanism has a light, it is recommended to remove the light:

If the problem persists, and the installation is current (it has not been at 125V), check that the switch cuts the “phase” and not the return. This can be verified in a very simple way.

Moreover, you just need to remove the bulb from the affected socket, and with a pole, finder check if it lights up with any of the holes in the socket. You can also check it in the connection tab that you will find at the end of the lamp holder cable.

However, the pole finder light comes on in one of the two holes in the socket or junction plug, the switch is not installed properly and cuts the neutral instead of the phase. You just have to invert it so it doesn’t blink.

On the other hand, the pole finder turns on in both cases, the bulb will always be receiving voltage, and the solution will be to install a small capacitor that we will talk about next.

Flickering with switch on

It may be the case that said source is designed to handle a power that is higher than the power consumed by the new LED light, giving more power than the LED light actually needs.

Solution: The solution to this problem is simple, we would only have to replace the power supply with a power supply compatible with the new light and sized to handle the power consumed.

Install as many LED lights in parallel as necessary

Another possible solution is to install as many LED bulbs in parallel as necessary until reaching the minimum load. However, this solution has two drawbacks. Additionally, we must bear in mind that the driver or the transformer consumes some power with. Since, which we cannot count 100% with the total power of the power supply.

On the other hand, we must also take into account that in case any of the bulbs that we install should fail. Also, it will decompensate the load again and cause problems for the rest of the network elements.

This is one of the definitive solutions to the flickering of led floodlights. If despite the possible quick solutions. You have not been able to eliminate the flickering of the LED bulbs. However, the solution is to install a small capacitor in each LED bulb.

Its installation is very simple; this small capacitor has two output cables, which must be connected directly with the lamp holder cable. Additionally, one on each side, to the electrical installation cables.

We are sure, now you have learned how to fix LED flood light flashing on and off. Once the cause has been found, the solution is usually simple. If an LED light flickers, it can have many causes. These range from unsuitable lights or dimmers to outdated transformers in the house.

Last but not least, the quality of the light sources is also decisive. Fortunately, most problems can be fixed quickly and easily using the tips above. However, in complicated cases, such as those relating to in-house electrical systems, you should ask a specialist for advice.

However, the LED only continues to glow when it is inserted. Therefore, it may be due to a faulty electrical installation or unsuitable dimmers; if the light concerned has a dimming function.

In this case, you should seek advice from a specialist who can fix the problem. So that the LED light does not consume unnecessary power when it is switched off.

How to Use a Multimeter to Test Voltage of Live Wires: The Safest Way
How To Sand A Car Before Painting: Step to Step Procedures!
Different Types of Screwdrivers: Ready, Set and Go!
Cracking The Facts Of Harley Boom Box 6.5 Problems: Secret Tips & Tricks!